With over 100 hours of PlayerUnknown’s Battlegrounds (PUBG) chalked up on PC, I’m no newbie to
what it has to offer.

PUBG has been a global phenomenon since it’s release into early access on PC in March 2017 and had sold a staggering 20 million copies by November this year! (For the mathematically-challenged, that’s 8 months).

It is a battle royale style game where you start with nothing, skydive out of a massive plane and fight to find the best loot and battle it out to be the last person (or team) standing.

I love PUBG. It’s got an intensity not found in many other games. Every choice and every life matters. You get distracted for a second or decide to go one way around a building rather than the other and boom! You’re dead and your teammates are screwed! The fact that you battle against anywhere up to 100 other players is crazy too. You never know what you’re coming up against.

PlayerUnknown’s Battlegrounds on Xbox One

Enough generic talk about PUGB, how does it handle on the Xbox One? To be completely honest with you, it’s rough! Essentially, it’s just an extremely bad resolution port of the PC version.

In one of our recent articles, we mentioned that @ChampChong on Twitter had revealed that if you plug a keyboard into your Xbox it brings up the PC menu! I gave it a try and sure enough, it works! Not only can you bring up the PC menu with some of the quality settings set to ‘Very Low’, but you can also somewhat play the game with the keyboard! Revolutionary!

I say somewhat play as there are a few buttons hard-mapped to the controller that just don’t respond. ‘Shift’, for running, is one of these. This piqued my curiosity so of course, my next action was to plug a mouse in. Alas, this proved fruitless. Whether plugged directly into the Xbox One or to the controller through the use of an OTG cable, nothing happened.

Using a controller after spending hours playing keyboard and mouse is horrific! I am using the greatest controller ever created, the Xbox One Elite controller. So, it is definitely not an issue of the controller itself. Being based off the ARMA controls there are a hell of a lot of button presses to map to one controller. This is my biggest gripe about the game as it is. Reload is a button hold, not a press, it’s frustrating as hell, reload should be one of the quickest actions! When do you want to slowly reload ever in a shooting game?

At it’s worst, PUBG on the Xbox One has terrible resolution and is laggy as hell. But, the core of the game that 20+ million people know and love is still the same. I had some really good rounds where assets loaded in properly and lag was minimal. It’s going to be a rough ride to get to perfection from the old console but, if the Xbox One is your only option you will love PUBG. When it behaves that is, and if you can get your head around the control scheme. 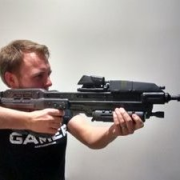 Tom is a Kiwi gamer and community host who likes to dabble in a spot of writing from time to time. Being a Master of Science (Chemistry) is a tough job so Tom likes to unwind by killing aliens in copious quantities (Destiny) and getting stressed out playing multiplayer games like PUBG and NBA 2K. Gaming is life for Tom and he loves sharing that passion with others through the videogame club he runs (Waikato United Gaming Society), his writing and with the Twitterverse (@Tom_nz).

1 thought on “How is PlayerUnknown’s Battlegrounds on Xbox?”