PAX Collaboratory is a brand new space at PAX Australia dedicated to unreleased tabletop games. It features designer with an unpublished tabletop game; and they’re ready to unveil their Promethean labours to the world.

PAX Collaboratory is the brainchild of Luke Lancaster, PAX Australia Content Manager. When the news was first releases, I wasn’t just excited;  I was blown away. As over the years, I have felt that the Tabletop section of PAX Australia has become something special, but was missing something.

Pax Australia had the indie section (Which I love and will probably be spending a lot of my time), but the Tabletop area had previously more been for published games or distributors; but not anymore!

Please go check out PAX Collaboratory; but before you do, check out some of my favourites!

Breakaway is a partially modular system, meaning not all mechanics are required game components. On the surface, it is an RPG featuring beast people, machine races, flexible magic and powerful technology. Underneath, it explores what it means to be human and what potential there could be to lose our humanity.

A follow up to the first ELFG game, this is a dice and card Mexican wrestling fighting game between 2-4 players. You play as a Mexican luchador inspired wrestler and use a combination of cards and dice to defeat other wrestlers. Around 30 mins playtime.

This is a pull or pass push your luck system, where you pull a coin from the bag until you decide to run, or the Dragon has you for BRUNCH! 2-4 players around 30 mins playtime.

Fluttering Souls is a captivating, beautifully illustrated two-player game based on the Japanese legend of The White Butterfly. You will compete to collect a kaleidoscope of butterflies in the hope of being visited by The White Butterfly; the soul of a lost loved one.

Runika and the Six-sided Elements

Roll dice, cast spells and try to survive your school year. In Runika and the Six-sided Elements, you and your friends play as wizard apprentices — collecting elemental dice, shifting them around on your player boards like a Rubik’s Cube, and matching them into patterns to score points. 2-4 players. 60-90 minutes. For anybody who loves puzzles and beautiful games!

The Tribes are expanding and alliances between them are fluid as you work to accomplish your objectives. A trick-taking game with several interesting and engaging twists set in the Occulite universe. Randomly choose several different Tribes (suits) to play with, each with their own unique effect on the game. Use the tribes alliances to play on suit, or use card effects to give you the advantage going forward as you play your hand to achieve the objectives you are working towards.

Played as Every Eye for Themselves, or in Alliance mode, The Trick with Occulites is a fresh take on a well loved genre.

Rare Roses is a family game featuring the artwork of renowned fantasy artist Nene Thomas where players compete as floral designers to fill the most orders. Players will purchase roses from the rose market, and use them to fill orders. You might even buy up the market and sell the roses to other players, for higher cost of course. The person who makes the most money by the end of the game wins. A little cut-throat, and a lot beautiful, Rare Roses is a fun game for the whole family.

Ape-X is a mid-weight euro, worker placement/engine builder for 1-5 players that takes 1-2 hours. All players are ape scientists and are competing for the facilities scientific grant. Each player has access to four unique types of co-worker that specialize in different areas. You must send your co-workers out to collect resources, perform abilities and buy Experiments, Lab Upgrades, Chemicals and Bananas to bring back to your lab; improving your engine to gain the most points.

Relics: A Game of Angels

Relics: A Game of Angels will be at the PAX Collaboratory. It is a unique roleplaying game that uses flashback mechanics to explore the past of long-lived angels, fighting a war against demons across all human history.

Cluster³ is a fast-paced set collection game with an attractive twist. You control a cube, rotating and rolling your way around a factory floor gathering magnetic tiles on each side as you go!

Compete against another to create the most impressive bouquet of flowers in your colour with Petal! Petal is a 2 player abstract set collection game where players create and pick flowers by stacking clear tiles with petals on top of each other.

Designed by: Games Made Slow

Mythmaker is an ambitious fantasy kingdom-building 4x. Play as humans, dwarves, elves or goblins to conquer your foes or prosper your people.

Victory will smile on the tribe who first achieves greatness worthy of myths: seize everyone’s crowns, construct a great wonder or discover a lost artifact in the heart of the volcano…

Designed by: Games with Teeth

A 2-6 player competitive game where players run their own logistics company and are in competition to complete as many contracts as possible while sabotaging other company operations.

Gateway Adventures: Adventure Island is an easy to learn introduction to Role Playing Games, perfect for younger players, or newcomers to the hobby, and provides budding Game Masters with simplified rules and large visual aids. Mermaids, pirates, hidden temples… what will you discover on Adventure Island?

A negotiation game where you will have to work with your band of criminals to overcome security forces and collect the loot. But who takes more? Build your tool deck to become to most powerful crook in the pack, and negotiate, bargain and backstab your way to riches.

For decades, New Gallagher has had an uneasy truce with the forest denizens. But recently, something has changed. The raids by Goblins, Orcs and Dragons are increasing in frequency, leading Mayor Quill to establish a Bounty program. Dare you enter the forest to tackle the creatures? And can you outwit Fate itself to return victorious, and gain the adoration of the town?

Bounty is a take-that dice-management game, in which 2-5 players compete over several Days (rounds). Each Day, the adventurers will complete three Hunts, rolling 12 custom dice to hunt, trap and otherwise overcome the Goblins, Orcs and Dragons.

You are a ghost challenging another ghost to a pepper-eating contest! Draft peppers, drinks, and ghostly powers and then attempt to force your opponent to eat a pepper that is too hot to handle! This light-hearted card game is for two players and takes about twenty minutes to play.

Jekyll/Hyde is an asymmetric double hidden movement game. Play as the cunning Dr. Jekyll or the monstrous Mr. Hyde! Secretly move around the brain you both share as you vie for control, increasing your power while threatening your opponent’s. Dr. Jekyll is trying to cure himself of Mr. Hyde while Mr. Hyde is trying to kill Dr. Jekyll. This tense board game of cat and mouse is for two players and take about thirty minutes to play.

Nova League takes the tabletop tactical space combat experience, and condenses it into a fast-paced game. The players pilot Starfighters, engaged in a dogfighting battle. Out-fly your opponents and try to shoot them down!

Crash Karts combines real-time dice rolling with programmed movement to create a frantic racing game for two to four players. Can you survive the whole race and cross the finish line first, or will you fall behind and be eliminated?

Work together to design a soup that solves specific requirements! The twist is that due to privacy concerns your requirements are secret! Players take turns to change a set of cards. Can you figure out how to make yourself and everyone else happy, without being able to tell your friend you’ve had enough of their eggplant spoiling the broth?

Unlike most other racing games, Drift Kings simulates the feeling of driving a car using a completely innovative movement mechanic called the TrajecTile system.

Using a uniquely shaped set of tiles, TrajecTiles, drivers plot their car’s movement on the track.

These tiles simulate everything from acceleration, braking and handling to “getting sideways” and drifting through those tight turns. Drift in the right areas of the track and drivers can earn Edge Points which can be spent on special manoeuvres like Nitro Boosts and Powershifts to get that extra edge on the competition. 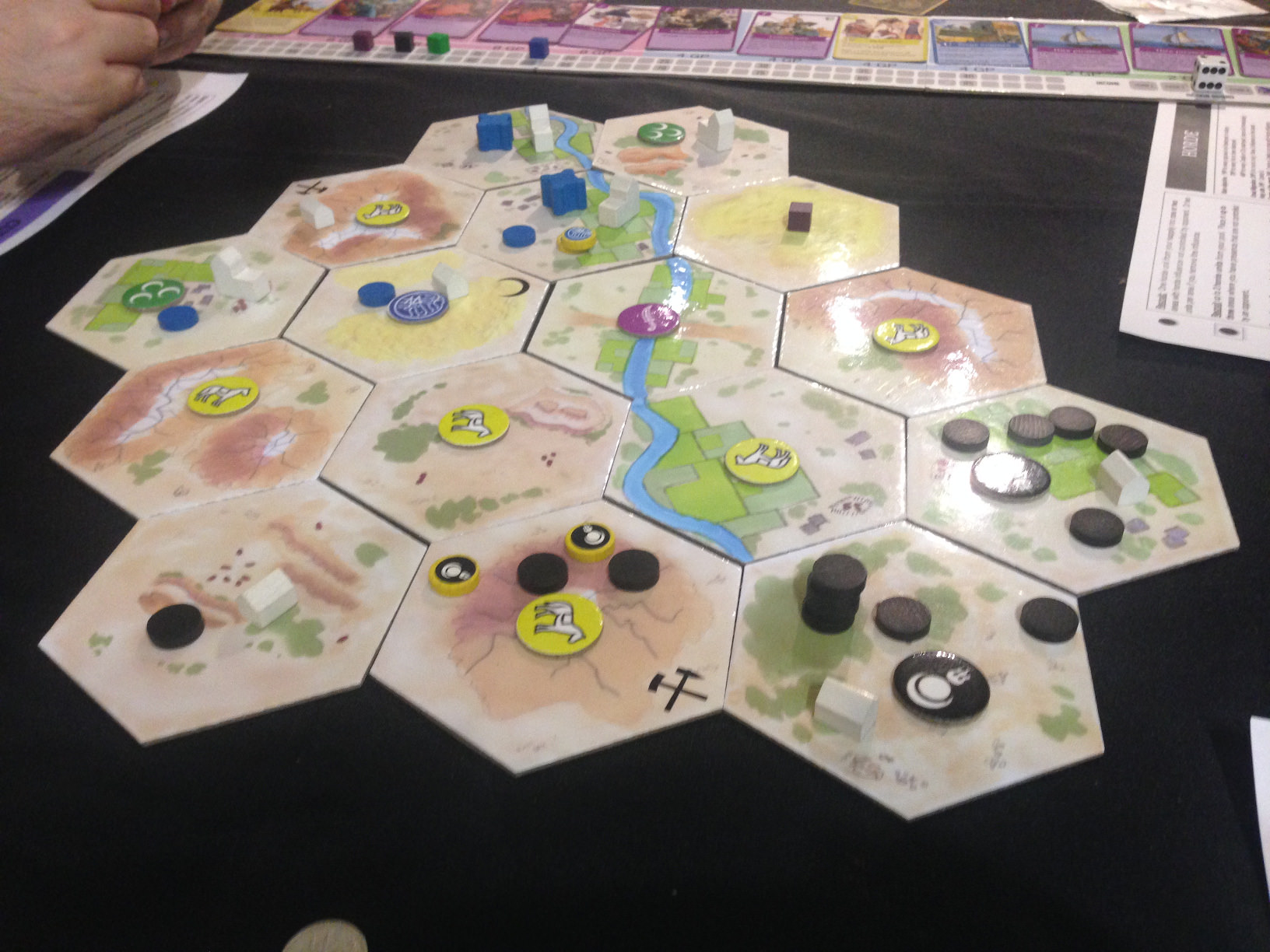 Kingdoms of the Crescent Moon

Kingdoms of the Crescent Moon is a ‘dudes on a map’ board game. Lead one of five factions – each with their own agenda – in their struggle for ascendancy in the lands of 1001 Arabian Nights.

Play with a collection of adorable creatures fighting over control of their secret forest! Basic and advanced rules available for young or experienced players.

At the height of Human evolution and endeavour earth’s inhabitants totaled 13.8 billion with a reach into the stars. Then came the invasion by the Caentari Alliance, along with it a war that lasted 100 years with only 1% of the planet’s population surviving.

It’s now 100 years after a failed alien invasion, a necessary peace exists between earths inhabitants, with human and alien having learnt to co-exist… just….

A high Scifi setting in a bleak post invasion future.

Teenage Mutant Ninja Turtles Adventures is the next mutation in TMNT tabletop gaming.

It is a miniatures combat game that takes place in IDW’s TMNT Universe. Taking on the role of one of their favourite Heroes in a Half Shell or their allies. Players will battle their way through scenario-driven campaigns focused on retelling the stories of the IDW comics or one of the many one-shot, quick play missions. Heroes will have to battle it out against a team of villains played by either a villain player (4vs1 mode) or an AI controlled villain (co-op) in the NEW Arcade Mode.

Depending on the game mode chosen, missions generally take between 30-120 minutes.

At Kickstarter this January fans can expect two stand-alone volumes/boxes, these include Teenage Mutant Ninja Turtles Vol:1 – Change is Constant and Vol: 2 – City Fall. Both volumes are completely compatible and expandable and focus on key stories within IDW’s TMNT comic universe. Change is Constant following the first two story arcs of the series; and City Fall, a fan favourite, focusing on the story of one Turtle’s unexpected recruitment into the Foot Clan.