Welcome one and all to Return to Cinema, where once a month I will be revisiting a past movie and telling you all about why you should… or in some cases, shouldn’t, watch a cult classic, modern marvel or complete flop. This month we hit The Big Lebowski.

This film won’t hit a cord with everyone in a broad sense, but the stranger you are the more likely you will see this movie as an absolute masterpiece of cult cinema. And boy, the Coen brothers know how to do a film with not just strangely stunning scenes but also near perfect casting. Also, this film has a whopping 81% fresh rating on Rotten Tomatoes, just in case you needed further reasons to go check out this amazing film.

Oh, you think you’re strange enough, do you? Check this out, this is from a dream sequence after Lebowski gets knocked out, man. And this is just one scene from it.

THE STORY… SORT OF
Released in 1998, The Big Lebowski is a FILM NOIR movie set in 1992 at the height of the bowling “fad” and during Operation Desert Storm with a deep and complex plot, and that may sound fairly off-putting to some, but don’t sweat it, man.

Why? Well, trust the Coen brothers to make the overly complicated plot of a noir detective style movie NOT matter at all. It doesn’t matter, none of it,  it all boils down to a guy trying to get back his rug after it gets destroyed in a case of mistaken identity.

The Big Lebowski begins with The Dude becoming entangled in the story’s mystery by sheer accident as he happens to share his name with wealthy old guy, Jeffrey Lebowski, whose wife owes money to a local pornographer Jackie Treehorn. Treehorn’s thugs mistakenly rough up the Dude in an attempt to collect the owed money and piss on the Dude’s rug in the process, ruining it. A shame, since it “really tied the room together.”

The Dude then seeks out the OTHER Lebowski of the story in order to get the soiled rug replaced, and stumbles in to a ransom situation where Lebowski’s trophy wife has been kidnapped and… Look, I could go on, but it REALLY doesn’t matter.

THE CHARACTERS
No two are the same, none of them. If you have ever written a story or a script, it is CRAZY difficult to not have any overlapping main characters, especially when the easiest relationships are the ones between similar characters. That’s a short-cut kids, don’t make them too similar.

Jeff Bridges (lead, Lebowski AKA The Dude) plays it straight up with the intentional stereotype of a “slacker pothead” and on the surface, Lebowski is just a hippy with no prospects and the instant reaction is “uneducated and lazy” to most, however there are several points in the movie where Lebowski shines a little bit of intelligence that isn’t overly pushed into the film but a more subtle fleeting glimpse of his superior intellect. And here in-lies one of the most well-written characters.

Lebowski (not unlike most leads in noir style films) works his way through an overly complex and convoluted plot full of mystery, hyper sexual overtones, betrayal and clumsy sidekicks to reach an eventual conclusion.

Also, this is the first film we got to see “that fat guy from Roseanne”, and BOY did we all take notice. He can ACT! This film was the first time we really got to see John Goodman do his thing, and the world is better of because of it. He plays the confident, gun toting “MURICAN” Walter Sobchak. A security store owner, semi-professional ten pin bowler and the type of guy who wouldn’t just boast that he pulled a gun on his daughter’s date, he would have done it, shoved the barrel in the date’s mouth and said “you touch her, you even hold her hand, and I will gut and shoot you. Do you understand?”

Goodman is the clumsy sidekick who adds an over-complication to the plot (he screws up the ransom drop) that isn’t actually required, but somehow makes the plot just so much better than it would be without him. This is fairly odd to state that something that makes the plot more complicated also makes the film better, instead of a steaming pile.

John Turturro plays Lebowski’s bowling rival, Jesus. A creepy (potential pedophile) Cuban with a thick accent. I couldn’t do him justice with a description, he plays it so well he makes my skin crawl. Just take a look at that picture above, such a great actor, but SO creepy.

Also, what really SELLS this movie is the body language. Every single person moves a certain way, they seem to really step in to their characters and not half ass it. Every line of dialogue is delivered perfectly and little known fact, only ONE line was ad-libbed. One single line.

The Big Lebowski should be on your short list to watch, so go do me a favour and get on that.

A strange addition to the props was Lebowski constantly drinking WHITE RUSSIANS. Lebowski’s drink of choice. Why? Ever had a half and half White Russian? No, GET ON THAT. It’s delicious and you should seriously just jump on and try it. I hope you enjoyed this little revisit to one of my fave movies. Have you seen The Big Lebowski? How do you rate it? 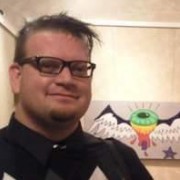 Is it worth watching Titans (DC) on Netflix? (spoiler-free)